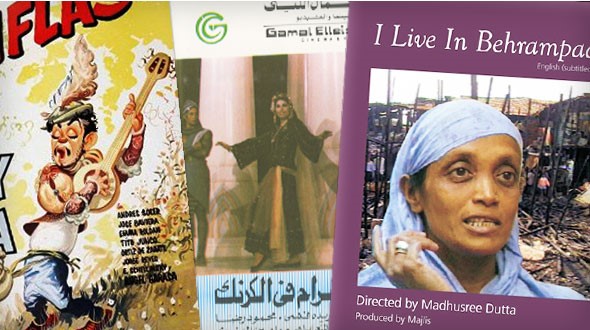 In an effort to provide an outstanding educational/academic service to researchers, instructors, and students both on- and off- campus, the Global Studies team in the University of Texas Libraries actively develops new collections and continues to develop them through time. Recently, our liaisons have been working in the development of a “Global Cinema” collection that simultaneously represents distinct academic, artistic, documentary, linguistic and political cultures from around the world through the lens of film and film studies.

For example, our South Asian cinema collection is comprised of documentaries as well as independent and feature films. Our documentaries and independent films cover topics that range from social issues, such as human rights and the LGBTQ movement, to religious and environmental studies. Our feature film collection is primarily Bollywood films with an increasing effort to include South Indian holdings.

Our Middle Eastern cinema collection consists of an extensive collection of feature films, art films, and documentaries by some the most recognized directors from this region, such as Yılmaz Güney, Abbas Kiarostami, and Salah Abu Seif. Our holdings represent all Middle Eastern languages, including Arabic, Persian, Turkish, and Kurdish. Some of the common themes and genres are the struggles of daily life, comedy, drama, and LGBTQ rights. Another significant portion of our cinema collection is represented by our classic belly dancing films, primarily from Egypt, which are currently being digitized. We complement this collection with an extensive number of journals and monographs related to the cinema of this region.

Likewise, our Israeli cinema collection distinguishes itself for possessing a large number of periodicals, some of them held solely by the University of Texas Libraries. We also hold a large number of monographs and films on DVDs, including some unique and rare titles. With the purpose of enhancing our Hebrew/Israeli collection, many of these titles are actively collected during acquisition trips to Israel. Future plans for this collection include digitization of some of the more unique and rare periodicals.

The Benson Latin American Collection’s cinema holdings include an extensive number of Latin American and U.S. Latino feature films, short films, documentaries and television programs ranging over many themes and historical periods. Examples include extensive holdings from the Golden Age of Mexican cinema, raw archival footage from documentaries, and hundreds of titles not held anywhere else in the United States. Our cinema holdings include films from the Cine Las Americas International Film Festival, which started in Austin in 1997 and whose archive is located at the Benson Latin American Collection, which includes close to a thousand works, many of which were never commercially distributed. Our cinema holdings also contain an extensive collection of U.S. Latin@ TV shows and films, highlighted by a large number of locally produced works. The collections specialists at the Benson have put a special emphasis on audio visual materials in recent years with the intention of expanding our already in-depth collection.