To enter browse mode, click the BROWSE button in the top menu bar on any page.

Note:  The Browse function works only in the Library Catalog (local records).  It doesn't apply with Articles & More.  Browse searches across all library locations. 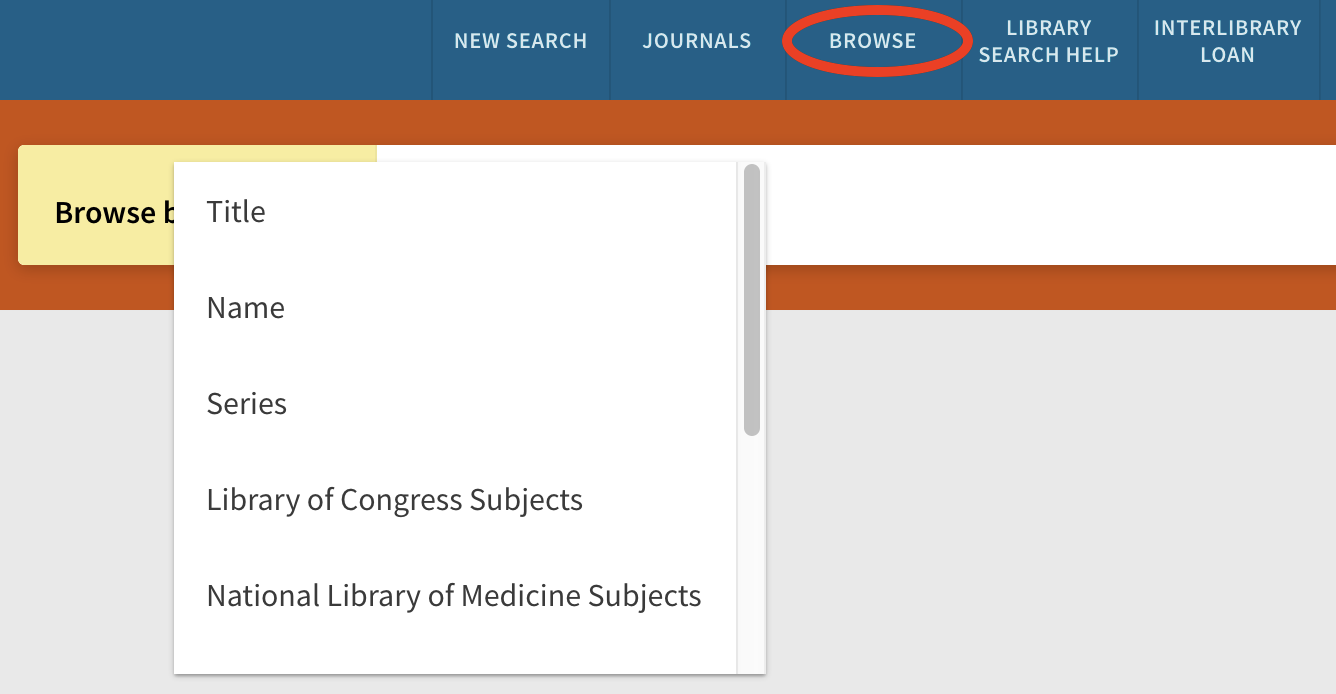 While you can search for words in subject headings via the Basic and Advanced keyword search boxes, sometimes it's useful to browse a list of subject entries from the Library Catalog, in order to see the hierarchical listing of topics and subheadings.  Just enter the beginning of a heading to start the browse - you don't need to know the entire heading structure.

Browse the names of persons, organizations, and meetings under the Names browse, which includes these names as both authors/creators and subjects.  Enter personal names with last name first.  Examples:

Topical subject headings that are not personal or corporate names can be browsed under this category.  The Library of Congress Subject Headings (LCSH) are an extensive set of controlled vocabulary terms used to catalog books and other materials by topic.  Subject headings often include detailed subheadings that subdivide a heading by topical, geographical, chronological, and format aspects. Examples:

The Medical subject headings (MeSH) thesaurus is a controlled and hierarchically-organized vocabulary produced by the National Library of Medicine. It is used for indexing, cataloging, and searching of biomedical and health-related information. MeSH includes the subject headings appearing in MEDLINE, the NLM Catalog, and other NLM databases, as well as local library catalogs.  Examples:

Browsing by call number is a way to virtually browse the shelves across the Library.  Only physical items in our collection have call numbers, so it's specific to those and doesn't include any electronic resources.

There are four different types of call numbers to browse:

Most books and periodicals cataloged after 1970 are classified and shelved according to the Library of Congress Classification system. Call numbers are based on the item's subject. LC call numbers consist of a combination of letters and numbers. The first two segments represent a general and specific subject area; this number is filed as a whole number. The following segment(s) combine a letter with a decimal number. A date of publication may be appended at the end.

Many older materials (generally pre-1970) in our collections have Dewey Decimal call numbers, which start in most cases with three digits or three digits followed by a decimal and more numbers, followed by a space and additional elements combining letters and numbers. Type letters in either uppercase or lowercase; leave spaces between the elements of the call number.

These call number types are used for non-book formats such as media, maps, microforms, dissertations and theses, and non-federal government documents. Others are used for various special collections in campus libraries. Call numbers are case-insensitive and can be typed in uppercase or lowercase. This table provides examples of the major format call numbers currently used in the University Libraries.

The numbers accessed by this search are classification numbers assigned to federal government documents by the U.S. Superintendent of Documents in Washington, D.C. These numbers are based on the originating government body or agency.  You can also search for federal documents in the GPO's Catalog of U.S. Government Publications (CGP) and find SuDoc numbers there.

Type the number including all punctuation. You may include or omit spaces; the search will be processed omitting any spaces in the number. Searches are not case-sensitive. You can type only the first part of the number if you wish to see other documents nearby.

You can browse the shelf virtually to "see" items that would sit next to a given item on the library shelf, based on call number.  This feature is found at the bottom of a book's full record display.  The tiles have a cover image (where available), title and year.  Hover over a tile to see its call number, and click on a tile to go to that record.  Note that this display combines multiple library locations in our collection, and includes items that may not be physically available on the shelf at the time.  It's not possible to limit it to one library location or available status.

Many books are published as part of a series.  Series volumes may be numbered or unnumbered.  The Series browse option lets you see a list of entries by the series title and numbers (if any).  The volumes in a series may be shelved together at the same call number, or they may be scattered in the collection according to each volume's topic.  Note that the order of numbered volumes in the browse list may not be strictly correct due to variations in the headings.  Examples: