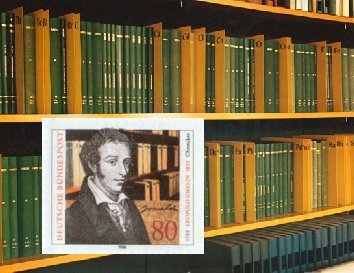 The 8th Edition of the Gmelin Handbook of Inorganic and Organometallic Chemistry is the most extensive printed compilation of information and data on metallic chemical elements and their compounds and alloys. It was compiled by the Gmelin Institute, part of the Max Planck Institute, and published in over 400 volumes between 1924 and 1998 by Springer-Verlag. All information in the Handbook was derived from the primary journal and patent literature of chemistry, physics, and metallurgy, and then critically appraised and organized by chemical element and species.

Gmelin is typically used to locate factual information on specific compounds. This information includes any or all of the following for a chemical compound:

Text is augmented by tables and graphs in many places. All information is accompanied by the source literature reference.

For the most part, the content of the Gmelin Handbook and its organic chemistry counterpart, the Beilstein Handbook, is mutually exclusive: compounds covered in one were by definition excluded from the other. Beilstein covered only organic carbon compounds with the elements H, O, N, S, Br, I, Cl, and F (plus a few narrowly defined exceptions). Gmelin covers most everything else: pure elements, ionic inorganics, salts, coordination compounds, organometallics, and alloys. Metal-containing natural products, biological substances, and macromolecules are excluded. While dense, the Gmelin Handbook is more textual and less abbreviated -- and thus somewhat easier to use -- than the Beilstein Handbook.

Although Gmelin was published over many decades, the series was not uniform in coverage or currency of the literature. Some elements are represented only by slim summary volumes published decades ago, with no further updates. Other elements (such as Fe, B, S, F, U, etc.) have numerous supplements. In most cases, later supplement volumes focused on an element's organic complexes (Organische Verbindungen). Each volume provides a literature coverage date on the back of the title page.

Gmelin is currently shelved on the second level of the PMA Library pending disposition of the Chemistry Collection.

The volumes of Gmelin are organized and shelved alphabetically by chemical element symbol (as indicated by the yellow shelf dividers). All known elements, including inorganic carbon and ammonium, are represented, though some elements are combined into a single set of volumes. Elements were assigned System Numbers, and compounds were assigned to an element volume based on the highest system number present in the formula. Within each element set, compounds are arranged by increasing order of complexity and number of constituent elements. In practice, a user does not need to know anything about this classification system, since compounds are most easily located using the formula indexes.

Before 1982, Gmelin text was in German, with English tables of contents, section headings, and sidebar tabs to guide the non-German reader. After 1982 it was published in English.

The Gmelin Formula Indexes (GFI) were published in four sequential sets covering the Handbook through 1995. To be sure you're not missing an entry, all four sets must be checked in turn. The indexes list in alphanumeric order all elements and defined compounds included in the Handbook. The Gmelin formula indexes are in strict alphabetic order by element symbol, not in the more familiar Hill Order found in organic formula indexes, or in typical cation-anion order of common inorganics. Thus, CuSO4 would be found in the index as Cu O4 S. Other expamples:
PBr3 = Br3 P
(CH3CO2)2 Mn = C4H6MnO4.
The index entry provides the conventional formula, Element designation, volume, part, and page numbers where that compound can be found.

Information on this compound will be found in the Copper (Cu) volumes, Main series (Hb), in volume B3, pages 1236-7. Ignore the System Number (60) as these are no longer used in the shelving arrangement.

The database version of Gmelin, known primarily from its inclusion in Reaxys, is not equivalent to the print. Much of the numeric property data contained in the printed Handbook volumes up to 1975 are searchable in Reaxys, but the text, tables, and graphics are not. Data from the 1976-97 Handbook volumes are also not represented in the database. For these reasons the print Gmelin is retained in the library.

Literature coverage in the Gmelin handbook and database was always very uneven. After 1976 the Institute extracted data from about 110 journals. Coverage and currency faltered after 1995, when the Gmelin Institute closed, and there are still large gaps in the data thereafter. From the late 1990s only about 60 journals were monitored for content.  The historical Gmelin dataset is currently owned by Gesellschaft Deutscher Chemiker (GDCh) and licensed to Elsevier for inclusion in Reaxys.  Current and recent excerpting of inorganic/metal-organic chemical information in Reaxys is now carried out as part of the Reaxys indexing system and is no longer related to Gmelin.