The following endowments provide important supplementary support for the Walter Geology Library acquisitions and operations. These funds contribute significantly to making valuable geology information resources available to University of Texas students and faculty, as well as to geoscience researchers nationally and internationally.

Established in 1984, the Joseph C. and Elizabeth C. Walter Geology Library Fund supports acquisition of materials in all areas of geology, as well as projects and activities to catalog, digitize and make accessible new and existing library resources.

The Tobin International Geological Map Collection Fund, established in 1980 by Tobin Research in San Antonio, provides funding for all purchases of maps and atlases for the Tobin Map Collection.

This fund focuses on support of acquisitions in paleontology.

The Barrow Fund supports subscriptions to selected periodicals and journals for the Geology Library.  This endowment was created in 1995 by Tom Barrow and his family.

This fund supports acquisition of materials in geophysics and remote sensing in all formats. The Chernoff family and Carlotta Chernoff (BA 1992, MA 1995) set up the fund in 2005 to honor Charlie Chernoff for his long career in geophysics.

The Wiley fund supports teaching and research in theoretical and applied water sciences, hydrogeology, hydrology, ground and surface water studies, hydroinformatics, etc. in all formats.  Faculty, staff, and alumni with the help of Mike Wiley (MA 1963, PhD 1970), the Barrow family, and others launched the fund in 2008.

Funded in 2012 by Jackson School staff member Debra Sue and Brian Trinque, this fund assists the library in acquiring information dealing with all aspects of climate studies.

Proceeds are used to purchase geoscience publications in German language or translations from German.

Donations in Kind - Books and Other Materials 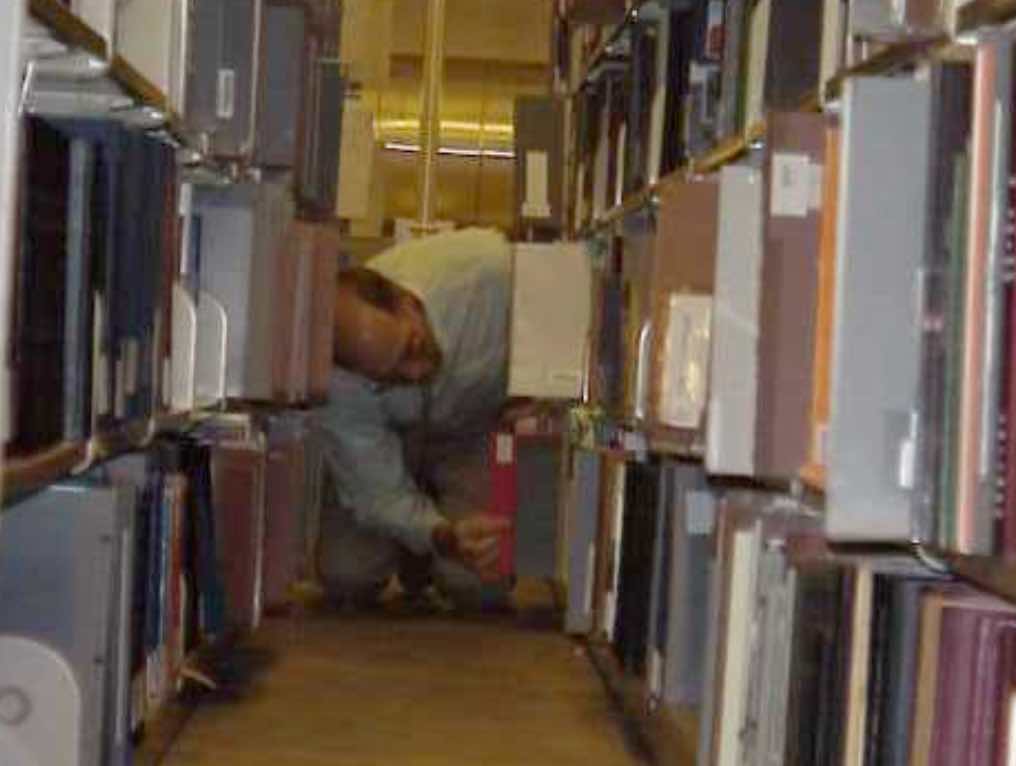 The Walter Library collection has been built over the decades via two main routes:  purchased acquisitions and donations of materials.  However, the limitations of space and staff, and the real costs of processing, require that the Library be very selective when agreeing to review and accept donated materials.

In general, the library may review and possibly accept these kinds of materials as long as they're in good condition and within the collecting scope of the Geology Library:

As a condition for accepting large donations, or donations of items requiring specialized processing (obscure or foreign language materials; in need of binding), we may request an add-on monetary donation to defray the costs of cataloging.

The library will not review or accept these things:

The University Libraries reserves the right to dispose of any unneeded or unsolicited materials without consultation with the donor. 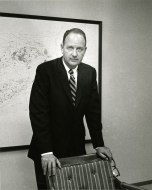 Geosciences alumni of the University of Texas from the late 1940's and early 1950's were a remarkable cohort. They were brought up in a Texas transitioning from “cows and cotton” to industry and petrochemicals. They were forged in the twin crucibles of depression and war, and whether or not they were directly touched by those events, their characters and values were guided by broader historical lessons. They were trained by excellent faculty and mentors to think about geology with precision, preparation, persistence and innovation - particularly the latter. Geology at this time was in the midst of a major transition as well - from an observational to an analytical science, and new technologies (another unintended consequence of war) would soon enable major theoretical and practical breakthroughs.

Joseph Charles Walter, Jr., or Joe as he was widely known, was a Houston native, the son of Gladys Hoskins and Joseph Charles Walter, Sr., an oil and gas landman.  From a petroleum geology perspective, he started with certain advantages.  Born on October 7, 1927, he graduated from Lamar High School and UT Austin with a Petroleum Engineering BS degree in 1949, and an MA in Geology in 1951.

His thesis, done under R.K. DeFord, was titled Paleontology of the Rustler Formation, Culberson County, Texas, and identified Permian invertebrates, among which was Derbya sulcata Walter. n. sp., now the image on the bookplate that bears his name.

Combining his petroleum engineering background with a paleontology study demonstrated the acuity of Joe's analytical foresight. It led him to an expertise in both hydrocarbon fluids and the unique rock materials that contain them as specific products of spatial, temporal, and biological processes. 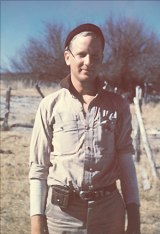 Joe did a six-year apprenticeship with Jersey Standard/Humble, honing his analytical skills further in evaluating oil reserves - crucial training for his later successes. During this period, he made two significant life changes, marrying Elizabeth Cowden from Midland (BS, UT Austin, 1951), and deciding that he did not want to spend his life behind a desk in a huge company.

In 1957, after daughter Carol Walter Looke and son J. C. Walter III (Rusty) were born, Joe set up shop in association with his father's business, Houston Royalty Company. Within the span of a few years, Joe Sr. and his partner Irwin Smith died, Joe (Jr.) and his partners bought controlling interest in, and later merged with, Royalties Management Co. from Tulsa. This gave him the capital base to begin his real enterprise - exploration for oil and gas.

As detailed by Jack Donahue in The Finest in the Land, Joe’s excellent skills and preparation in assessing reserves served him well. His new company, Houston Oil and Minerals, went public in the late 1960s. After flirting with the refining business, Joe took a long shot on a gas play in the Frio of Galveston Bay and got a big boost, permitting the company to go international. Again, Joe was successful, working the North Sea, Africa, Middle East, South America and Australia, where he got into and out of the coal business. At the same time, writes Donahue, Houston Minerals Corp., a subsidiary, was building the fourth largest mineral position in the US. Meanwhile, the company got into and out of the Baltimore Canyon play without losing money, and the little startup now had five divisions and 1400 employees. Joe Walter, by this time suffering from heart disease, was stuck behind a desk at a big company, and exactly where he did not want to be. In 1981 he arranged a merger with Tenneco, had a heart transplant at Methodist Hospital performed by Dr. Jimmy Howell, and attempted to retire, but within two years, as head of Walter Oil and Gas and president of the Petroleum Club in Houston, he was back making deals.

For the rest of his life, Joe continued his business interests with Walter International and Walter Oil and Gas International, but he also had time for other pursuits. He has been widely acknowledged as a major force behind Houston's Methodist Hospital and Methodist Health Care system, and St. Luke's United Methodist Church. He loved to hunt birds on his “farm” near Brownwood; he was an avid woodworker, and, most crucially, was a great friend of the University of Texas at Austin. Joe received many honors from The University of Texas and has given us many as well.  He died on June 14, 1997.

University of Texas at Austin Awards and Honors 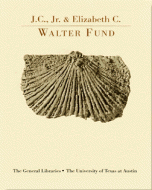 It is the last two items that deserve special attention here. In 1984, when the Walters endowed the Geology Library, the collection was strong, but the worlds of geology, publishing, and academic libraries were poised on the brink of enormous changes. The Walter gift gave the Library the opportunity to reach for excellence and growth at the very time when market forces caused the geological sciences and most university libraries, including The University of Texas, to begin to shrink. The late 1980s and early 1990s were a hard time for libraries in particular, with prices rapidly rising, expensive technological developments, constricting budgets, and painful decisions to be made in every budget cycle. The Walters’ foresight allowed their namesake collection to forge ahead into new thematic areas and wider coverage, and these ambitions drew more resources, particularly from the Barrow family, the Chernoff family, and many alumni who benefited from this great information resource and wanted to give back.

In 2001, when Jack Jackson's initial gift was put to work to add on to the Geology Building, Elizabeth C. Walter Keeney, Carol Looke and J.C. (Rusty) Walter III stepped forward again with funding to renovate and refurbish the Walter Library, further positioning it as a leading earth sciences information source for the 21st century.

Joe, described by his peers as the archetypal wildcatter, made his own luck one last time, with the quiet foresight and thoughtful generosity that were his trademarks. We who benefit daily from this library are thankful to Joe, his family, and his friends - our alumni and supporters, for all they have done.

Donahue, Jack , 1984. The Finest in the Land: the Story of the Petroleum Club of Houston. Houston: Gulf Pub. Co. 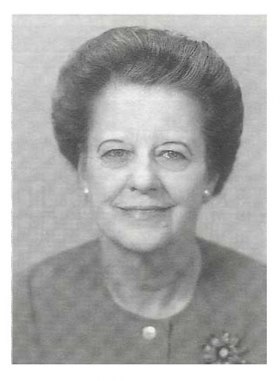 This award is given to one or more people who have provided excellent service or assistance to the Walter Geology Library.